STICKS AND STONES?
I must admit to having somewhat of an obsession with bullying.  Much of this is due to my working in a middle school where we have been trained in bullying-prevention, and as a result I am now aware of much more than I ever wanted to know about bullying.  To know that Dr. Dan Olweus, the founder of the institute that has researched, studied  and promoted this program began his crusade against bullying after the suicides of three Scandinavian school children is merely the tip of the iceberg.  The prevalence of bullying is staggering.  Surveys at all levels of children from elementary through high school show that one in four students report having been bullied.  Children as young as eleven years of age have committed suicide as a result.  Approximately half of all bullying in school goes unreported.  Though a staggering amount of bullying is aimed at children perceived as gay, students are bullied as well for being too short, tall, thin, stout, smart, dumb, rich, poor...you get the picture. 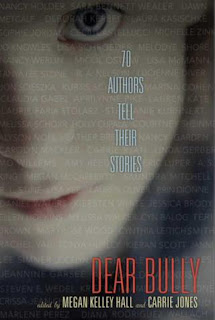 Then, along comes a book just released this month called Dear Bully; 70 Authors Tell Their Stories edited by Hall and Jones.  It stunned me.  Authors like R. L. Stine, Jon Scieszka, Nancy Werlin, Lisa Yee, Ellen Hopkins and Aprilynne Pike have all written their own accounts of having been bullied.  They have written as well about their experiences in some ways as transforming them into writers.  Amazing! The book also includes letters to bullies, poems, and comic strips.  And some of the material comes from the bullies themselves, not just the bullied.   Dare I say that this made me hopeful?  How naive of me to think that all writers and writing comes from a happy place. Writing as therapy?  What a concept. I think I've been writing rhymed verse for too long.  How thankful I am that these writers are getting the best revenge with this little book!
One of the most painful things about reading the passages was the oft-repeated mantra from parents and teachers that 'you'll get over it' or not to make it 'such a big thing.'  Bullying will not be swept under the rug any longer.  Many of the passages were authors imploring kids to tell someone.  That they will get through it, that they will not forget it, that it is a big deal, and that..."maybe one day you can turn it into a great novel.  That'll show 'em."  Indeed.
Posted by Andrea Perry at 6:00 AM