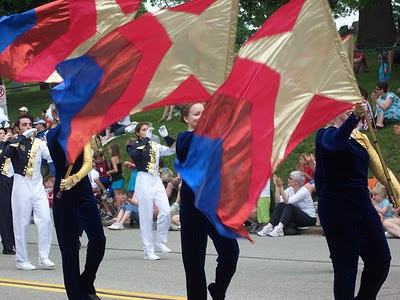 Back in high school, you wouldn’t have caught me dead at a high school football game on a Friday night. If an event didn’t involve art, theater or female songwriters, it didn't interest me. Who knew that several decades later you’d find me in the bleachers. Why?
My daughter joined the marching band.
She's a member of the Guard, the team of girls who wave colorful flags in glorious, swirling precision to the music. Last month she asked if we could host one of the dinners held before the home games.
As a YA writer, I was thrilled. Here was a golden opportunity to talk to 17 high-school girls about what novels they love to read. I had the whole thing planned – over a hearty meal I’d ask about their favorite books, talk about characters they loved, discuss beloved authors – and I'd write up the results for this blog.
"No," my daughter said. "Bad idea." She tried to warn me, but I didn’t listen. The girls flew in, did their hair and makeup, gossiped about boys, chattered like, well, high schoolers, ate, grabbed their treat bags and flew back out the door to get to the school by Report Time. I'd have been too busy pouring drinks and setting out dishes to participate even if there was time and interest.
Research plans, like life, don't always go the way you hope.
While I didn't get to talk to the entire team, four of the Guard Girls were visiting a few nights later and talked with me about their favorite books. When I asked them about some of my favorite YA novels like Looking for Alaska and Thirteen Reasons Why, they said they'd read them, but none of them ranked those books with their top picks, which surprised me. Other award-winners were mentioned. Here's their list:
The Harry Potter series (2 & 6 were special favorites), by J.K. Rowling
Princess Academy, by Shannon Hale
A Great & Terrible Beauty, by Libba Bray
Peter Pan, by J.M. Barrie and Scott Gustafson
Angus, Thongs and Full- Frontal Snogging: Confessions of Georgia Nicolson, by Louise Rennison
Murder on the Orient Express, by Agatha Christie
Nancy Drew Series: Secret of Shadow Ranch & The Secret of the Old Clock, by Carolyn Keene
Isn't it interesting that the older classics popped up? Not the 'results' that I was expecting – but that's why I make myself do research even if it's something I dread (like calling that scientist about water analysis equipment for the story I’m working on).
What was expected was a good meal for the party. If you're going to feed teens who report for duty at 5:15 pm and won't be done until 11:00 pm, you want to serve food they'll eat instead of push around their plates. Ilene, another mom and a great cook, teamed up with me and made lots of the food. The girls loved the dinner.
Here's our menu and a recipe.
Spinach lasagna
Baked Squash (with egg, flour, sugar & cinnamon)
Raw broccoli salad with cashews, sunflower seeds & cran-raisins (this was wonderful, too bad I forgot to pull it out of the refrigerator and serve it!)
Green salad with cherry tomatoes & feta cheese
Cornflake Chicken
Brownies & crisped rice treats
Recipe for Cornflake Chicken
(The coating keeps the chicken incredibly moist)
Oven: preheat to 350 degrees F.
If you're not cooking for a crowd, cut down the recipe. Use drumsticks or other bone-in chicken pieces if you prefer, just pierce the skin and make sure the juices run clear to test for doneness. If you have leftover cornflake crumbs, seal up the bag and keep it in the refrigerator for the next time.
Hope your friends/family/guests enjoy!
Cheers, Jenny
Posted by Route19 Writers at 6:00 AM