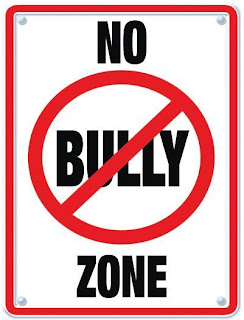 A very hot topic as of late, at least in (elementary) academic circles, is bullying prevention.  I work in a middle school with fifth and sixth graders, and this week am attending a Bullying Prevention Training Program which our school district hopes to implement come fall.  The specific Bullying Prevention Program we are being trained to implement was developed by Dan Olweus, a Norwegian researcher who has been doing research on bullying since the early 1970s.  At first I was intrigued that one of the main proponents of the training is in fact "training" the bystanders of bullying to become empowered and have a clue what to do.  Studies have shown that bystanders often feel helpless and guilty for not acting.  They feel that they should be involved but just don't know how.  Secondly, I had thought the training would involve policing 'hotspots' known for bullying incidents located in our school and tactics for handling bullying situations.  Though these issues were addressed as well, imagine my surprise when the presenter started pulling out children's literature to be used in conjunction with some of the components of the training! 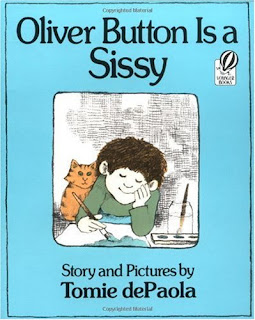 On a related note, I have long held that there is a picture book that can somehow be used in teaching just about any subject there is. But bullying? Though there are bullies in many of the novels that our studetnts read, including Bridge to Terabithia, Bud, Not Buddy, and Because of Winn Dixie, to name a few, I had never heard of  Oliver Button is a Sissy by Tomie De Paola.  I had a chance to read it today and ran out to order a copy right after the training.  There are also a few picture books about bullying by Trudy Ludwig, including My Secret Bully, but Oliver Button really resonated with me.  It also made me prouder than I sometimes feel about some of the children's picture books out there that often do much  more than entertain.  Good children's books sometimes show up in the unlikeliest of places.  Today I was thankful for that.
Posted by Andrea Perry at 8:43 PM