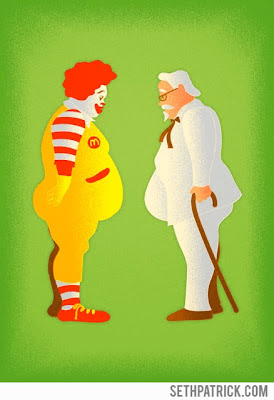 This picture was done by Seth Patrick, who also designed our logo.
Seth's a great artist and illustrator. Check out his website at
sethpatrick.com


I had a birthday recently. It was one of those big ones with a zero at the end that no one will let you quietly ignore, and it was a “middle” birthday. A big fat 50 middle. I’m doing that mid-life thingy where you contemplate the sagginess of your life and try to resist the urge to do anything drastic, like sky-diving or starting a pig farm.

I’m also the mother of three children, which means I have a middle that is most definitely sagging. If you look at my profile picture, or my skinny-skinny chicken legs, you’d think there’s no way I have a sagging middle. But there it is. And if I put on 5 pounds tomorrow eating too much mashed potatoes, 4.999 pounds of it will go to my saggy-baggy middle.

I’m also working on a novel, and I’m – you guessed it – in the middle. Desperately trying to keep it from sagging. The opening chapters were fun to write (and re-write and re-write) and I’m oh-so-excited about the climax. But that darn middle, where I have to somehow push readers from point A to point B.

Therein lies the crux of the matter – all too often we writers think of the middle as simply getting from point A to point B, to just get it over with. But that’s sort of like thinking that when you climb a mountain, all you’re trying to do is get to the top. If all you’re trying to do is get to point B, you’re missing the Point. The middle has a purpose; it’s where the main events happen, where we truly get to know the characters and their motivations and relationships and secrets, and where the central questions of the novel are explored and complicated.

1. Raise the stakes. Especially the emotional stakes. You raise the stakes by throwing your main character into worse and worse situations. You raise the emotional stakes by making a greater and greater disconnect between what the MC wants, and all the things you’re throwing at him/her that keep the MC from getting what he/she wants. If it really matters to the MC, it will really matter to your readers.
2. Have a memorable plot structure. By this, I mean that the events that drive the story forward are distinct and stand out to the reader. Distinctness can come from a unique setting, or something drastic or hilarious that happens. Have you ever read a book that is beautifully written and perhaps even has well developed characters, but you just can’t remember what happens in most of the book? Not good. If in doubt, push the edges, make a zany supporting character even zanier, make a dead body show up stuffed into one of the giant washing machines at the laundromat. Make your reader gasp. If they gasp, they will remember. Alternatively, making them pee in their pants from laughing will work too.
3. Reveal secrets. Don’t save all your twists until the end. This advice is not just for murder mysteries. It’s for all mysteries, which means it’s for all stories, because all stories at their heart are mysteries.
4. Have multiple paths, but no dead ends. You don’t want a simple, straight plot to get to the end. Those twisting paths that run alongside the main path – called subplots – add intrigue and depth. They often involve relationships. But don’t let yourself wander off onto a dead end – a path that doesn’t advance the plot. To do this, you want most of your scenes doing double or triple duty. For example, a relationship takes a twist as a result of something external happening in the story.
5. Do NOT NOT NOT do a long backstory dump. You may want to give us, the readers, a long explanation of things that happened before the novel started, but we don’t want to read it. At least not all at once. It’s tempting after an action-packed beginning to settle into long exposition. Don’t do it.
6. Have mini-arcs in your chapters. Each of your chapters should have its own arc, where tension builds through the chapter towards a climax. All of these arcs within chapters have to contribute towards the main story arc. After a chapter climax, give readers a VERY short breather. Like climbing a mountain, if you take very short stops to catch your breath, you can go even higher. But if you stop for a nap, forget it. Your reader will not tolerate a nap.
7. Cut out the fat. Be ruthless about trimming out excess words, sentences, scenes. Trimming fat can also help on the other kind of sagging middle too.
8. Raise the stakes. Hmm, I think I already said that. Must be repeating myself here in my middle years (which you should not do in your novel middle). But it bears repeating: RAISE THE STAKES!

I’m going to go slump down into our giant beanbag chair, eat some sag-inducing chocolate, and dream about pigs jumping out of airplanes with little parachutes attached (no worries, no pigs will be harmed in my dream). I’m quite content with much of the sagginess in my life. Just not in my novels.

Need Something to entertain the kids on Thanksgiving? Here’s some very saggy, very fun stuff to make with them. I love oobleck. This works best if you’re going to someone else’s house for Thanksgiving, and you’re doing it with someone else’s kids. It’s from my book Amazing Kitchen Chemistry Projects You Can Build Yourself. 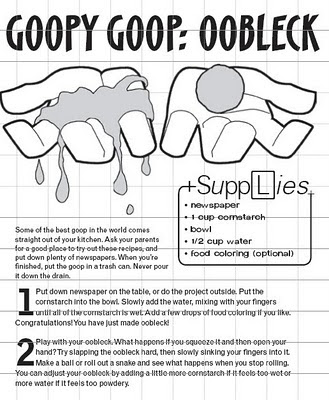 Posted by Cynthia Light Brown at 12:38 AM