Just where did the word THUG come from? by Kitty Griffin 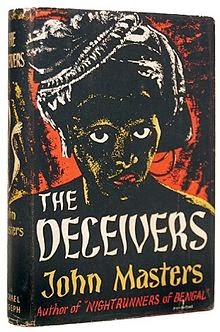 What did Eliza Doolittle say? “Words, words, words, I’m so sick of words.” Well, there’s a word I’m sick of. It’s a word that’s being used to describe a group of people and the thing is, it’s really the wrong word.

I know about this word because I listened to an audio book, “The Deceivers” by John Masters and I learned a great deal about Thugs, or Thugees.

How did this word evolve? What is its etomology?

According to answers.com it goes back to the early 1800s where the word “thag” in Hindi meant swindler. As the British conquered India they began to use the word “thuggies” to indicate any group of outlaws.

The Online etymology dictionary tells us this:
(http://www.etymonline.com/index.php?term=thug)

“The thugs roamed about the country in bands of from 10 to 100, usually in the disguise of peddlers or pilgrims, gaining the confidence of others, whom they strangled when a favorable opportunity presented itself, with a handkerchief, an unwound turban, or a noosed cord. The shedding of blood was seldom resorted to. The motive of the thugs was not so much lust of plunder as a certain religious fanaticism. The bodies of their victims were hidden in graves dug with a consecrated pickax, and of their spoil one third was devoted to the goddess Kali, whom they worshiped.”

So, using the word thug to describe angry young men living in an impoverished ghetto and rioting…well, what do you think? Is it the right word?

Are these young men doing it for a god?
Is it part of their religion?
Are they giving part of the spoils to a god?

Do you understand why I am puzzled?

The word has stayed with me since listening to Master’s book. It’s an astonishing tale of a young British soldier who becomes obsessed with finding out who the thugs are. He finds out all right. He becomes one of them. He learns how to quickly kill with his cord. He learns the secret of the sugar. He learns the power of Kali. It is a very powerful story and not an easy one to listen to. I can still hear the chanting. I can still picture the killings.

So again I ask, is thug the right word? 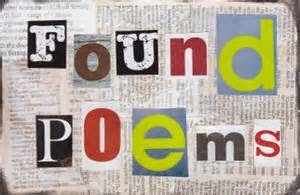 A 'Found Poem' is a treasure.  But where can such a treasure be found?  Here are three ways to create them in your classroom:

NOVEL GROUPS:
As part of an English/Language Arts Novel Unit, Found Poems can be created as part of a novel character analysis.  By taking snippets of dialogue from a specific character, students can then begin crafting poems which paint a character picture with words.  Dialogue can be limited to a chapter or cover the entire novel.


In a SOCIAL STUDIES setting, Found Poems can be utilized as dramatic poetic interpretations of historical events as varied as battles, inventions, documents, political figures, or archeological discoveries.  Using textbook or other classroom materials, students can reword and re-explain, presenting their poetic version of the selected topic.

CURRENT EVENTS:
Current local, national or worldwide news discussions in the classroom can be re-designed into works of art as well. By simply cutting and pasting student-selected parts of newspaper or magazine or newsletter articles, individual student views can be expressed and shared.  For example:

I highly recommend using a dash of Found Poetry to spice up your classroom.

All of us at Route 19 Writers have attended a ton of conferences on writing throughout the years. I asked the group to name the top conferences they’ve attended. A lot of our choices overlap, but here are our top picks.

Marcy: I was fortunate enough to attend the Rutgers conference in 2011 and 2012. This is an amazing conference and probably my favorite. It is truly inspiring to spend the day working and talking with agents, editors and writers. These professionals volunteer to help authors take their writing to the next level. I get goose bumps just thinking about my time spent at Rutgers.

KITTY
Most professional is Rutgers

DAVE
Favorite conferences for me…… Rutgers One-On-One Plus conference

JENNY
In agreement with everyone - Rutgers

MARCY
I’ve attended the New Jersey SCBWI conference a few times. The region does an amazing job of bringing in top agents and editors. And being from out of town, they made us feel right at home. They do a bang up job of running terrific workshops, intensives, pitches and manuscript critiques.

Most useful is the NJ weekend

SCBWI Conferences inside and outside your region
https://www.scbwi.org/region-map/

Obviously, since we are all from Western Pennsylvania, we’ve all attended (usually every year) our regional SCBWI conference as well as retreats and other events, which are awesome. But find regions that are within driving distance as well. Like we did with New Jersey. Several of us have attended that conference because we heard people talk so highly about it.

Jenny and I visited a YA event several years ago in Cleveland, Ohio, which inspired this post by Jenny: http://rt19writers.blogspot.com/2011/01/my-magic-board-getting-started.html

We spent a few hours driving and listened to an amazing presentation about YA writing.

Check out events that are within driving distance. Bring a friend and make a few new ones. You’ll learn a lot.

KITTY
Most spiritual is Appalachian Writers workshop at the Forks of troublesome Creek in Hindman, KY

Check out writers’ retreats and one day workshops. We have all attended our local writing retreat weekend. It's always inspirational and a lot of fun to spend the weekend with other writers.

Create your own workshop

All of us at Route 19 Writers continually work on our craft and keep learning as this world of writing changes. We brought in Emma Dryden to work with the group for a weekend (see below post). Everyone in our group would agree this was an amazing weekend. Emma helped each one of us grow as writers because of her expert advice and guidance.

And we continue (with Kitty guiding us) to bring in speakers and guests to help us hone our craft and learn more about the business and marketing side of publishing.

A while back, I (virtually) met a fellow SCBWI newsletter editor from Texas, Vonna Carter. At the time, we were both diligently putting out an SCBWI newsletter for our regions. Vonna posts a comprehensive list of writing conferences on her site. Check it out. It’s a wonderful resource for conferences and writing events.

And for these conferences, as Kitty advises, always check for scholarship money and grants.

What is your favorite conference or one you hope to attend this year?