Rhyming Tips: Use Your Thesaurus!

One of my favorite things to do is to come up with a rhyme that is a clever play on words, or is an unusual rhyme. I find a rhyming dictionary crucial for finding those unusual rhymes I wouldn’t think of by myself. But the tool that’s even more important is a thesaurus.

That’s because when I’m rhyming, I have to shuffle. Or maybe juggle. I have an idea I want to get across, or maybe a plot point in a story. I start with an interesting word, and try to rhyme it. Usually, there isn’t a good rhyme, so I have to try to rhyme another word that means the same thing; hence the thesaurus. Of course, when I change one line, I might have to scrap another. So it’s like juggling lots of balls at once. Or maybe I’m shuffling them around (and whether to use the word juggle or shuffle would depend on what rhymes with them).

The following rhyme was in one of my nonfiction books, The Geology of the Pacific Northwest. 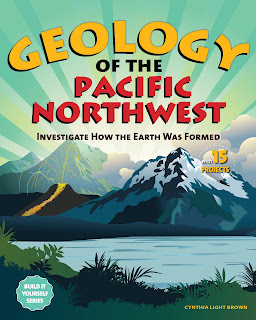 I wanted a fun rhyme about plankton that could include any of the following that I had discussed in more detail in the text: they’re very small; includes both phytoplankton and zooplankton; they’re the basis of the entire oceanic food chain; they float around aimlessly; they live near the surface so the phytoplankton can photosynthesize; the larger plankton eat the smaller plankton; they’re also eaten by larger animals; when they die they sink to the bottom of the ocean and can eventually be covered by sediments to form oil; they can cause algal blooms; etc. etc.

I tried rhyming float and aim. Neither worked. What’s like float? Move from place to place? Not working either. Suspend? Nope. But drift was interesting because of swift.

Lots of other ideas were dead ends, such as food chain or food web, as well as size (microscopic, small, etc. although tiny had possibilities because of briny). I tried rhyming with all kinds of creatures that eat plankton, and anemone turned out nicely. Sometimes, I get a nice pair of words that rhyme and relate to plankton – like tiny and briny – but it just doesn’t work in with the entire piece, so I have to kill it.

One of my favorite words associated with plankton is “diatom ooze.” It’s scientific, but it’s also fun to say. Rhyming it was tough. Booze? Maybe not. Snooze? Lose? Maybe; I played around with that for an hour or so. Cruise had possibilities. But "choose" somehow clicked with the two possible fates of plankton. And that clinched the whole thing. 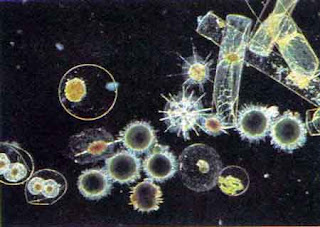 We twirl and swirl,

We float and drift.

We’re not too swift.

Which makes us prey

And whales and fish and…

They gobble and gulp us;

And if they should miss,

We sink to the dark.

What would you choose?

The belly of a whale,

Or a diatom ooze?