by
Carol Herder
The following are my opinions alone and don’t reflect the blog’s or any of the blog’s contributors.  I've written a book review of an adult book to demonstrate how book censorship affects everyone.  I’ve just finished reading Three Cups of Tea by Greg Mortenson and David Oliver Relin. I’d like to share some thoughts about this book. 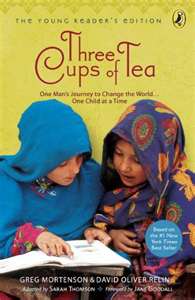 Three Cups of Tea is about Greg Mortenson, a mountaineer who failed to climb K2, got lost, and stumbled into Korphe, a village in the mountains of Pakistan.  Dismayed to learn the village had no school, and thankful for the hospitality of the villagers who had little to give a stranger but nevertheless shared generously, he promised to build them a school.  The promise was hard to keep, and it took longer than he thought, but finally he built their school.  Later he founded the Central Asian Institute.  The institute builds schools for girls  in Pakistan.  Boys, of course, attended these schools as well.
I particularly found this part of the book interesting – when girls in a village started attending school the infant mortality rate and sickness in villages decreased.  Mortenson also came to believed that education was key to fighting terror.  Many boys, with no education and no options, joined the Taliban.  With education children would have choices.    After 9/11 this theory led Mortenson to Afghanistan to keep a promise to build schools there as well.
To underscore the wickedness of banning books I’ve copied out an excerpt from Three Cups of Tea.  This is what Mortenson found in the lecture hall at the Kabul Medical Institute:
Dr. Nazir Abdul, a pediatrician, explained that while the Taliban had ruled Kabul, they had banned all books with illustrations and publicly burned any they found.  Armed Taliban enforcers stood at the rear of the lecture hall during class, making sure the school’s professors didn’t draw anatomical diagrams on the blackboard.
I admit I got a little thrill when I viewed the 2010 challenged book list and learned I’d read several books on the list.  I remembered getting the same thrill after reading Dr. Zhivago and learning the manuscript had been smuggled out of Russia to be printed.  It’s human nature to be drawn to the forbidden.  So, might not other readers – adults, teens, and children alike – get that same thrill when they read Hunger Games, Crank, or Twilight?  If so, doesn’t that do the opposite of what this kind of list is trying to achieve.  Hmmmm
Yet, despite my little thrills, I’ve been humbled.  Imagine trying to learn anatomy without drawings of the human body?  Trying to feed a family without knowing about germs?  Having no option but to become a fighter when you’d rather be fixing computers?
Although Three Cups of Tea isn’t my favorite book, it made me think.  And isn’t that one of the basic requirements of any book?  When you read Three Cups you’ll see Mortenson understood this as well.  I applaud him for going out and making people think.

Although Three Cups of Tea isn’t a challenged book, controversial articles and reports have been written about it.  Here’s my take, but I encourage all to read about the allegations against Mortenson and make up their own minds.  Many of the claims have already been refuted, as well as people dropping out of the class action law suit against him.  To my mind the most important issue was the low percentage of CAI profits, 40%, spent on the building of schools.  This charge could quite possible be accurate.   However if you read the book you may believe as I do, that it wasn’t due to misallocated funds.  Instead I’ve come to the conclusion it’s due to Mortenson’s style of “helping.”  If he came to a village that needed a well, he built it.  He didn’t think about money.  Instead he thought,” how am I going to get the supplies up here?”  He thought about getting the job done.  It sure isn’t the best business model, but it’s Mortenson’s style, and it succeeded where very few others even tried to help.  In conclusion I’d say, don’t go by hearsay, read the book, read the reports, and decided for yourself.
Here’s a thought about food.  With the last harvest of green beans and herbs I’ve taken to roasting green beans and parsley tossed with olive oil and my own special blend of pepper.  In my pepper mill I’ve mixed coriander with white and black pepper corns and come up with a delicious new taste.  Roast the beans in your oven on 400 F for about 35 minutes, until they look a bit like crisp French fries.  You can’t go wrong with ANYTHING that resembles French fries!
Posted by Route19 Writers at 6:00 AM