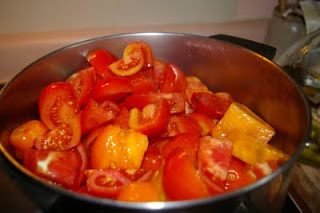 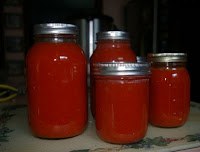 I often use time that is quiet work for thinking about stories. As I got to work on my "family famous" tomato soup I also worked away at a story idea. Writing and cooking have lots in common, you need a good base, you need just the right seasonings, and things need to bubble.
Come on, bubble along with me.

It’s canning time and those tomatoes that don’t make it into the sauce or into the diced/stewed/whole jars get put into a great big stock pot as I get ready to make my tomato soup.

A man wakes up to find his wife dead in the back yard.

As he begins to investigate he finds that he never knew

the woman he married.

I didn’t buy the software needed to enter the screenplay contest, but my brain went to work on this idea.

Soup: Oh, can’t put rotten tomatoes in. Those go into the compost pile. It’s okay, they’ll help build the soil for next year.

Story: Think carefully. No rotten ideas. If she’s dead in the back yard, how do we make sure the cops don’t arrest the husband? And don’t make her a spy or something that’s been done before.

Soup: Okay, I have a nice mix of red and yellow tomatoes in here.

Story: Ah, the guy was in a terrible accident. It was his wife who saved him and gave him a reason to live. The accident was so bad that he doesn’t have the use of his right arm. That means the death has to be a physical attack.

Soup: Put the lid on the kettle and let it simmer.

Story: How did the wife save him? Think about this. This is the back story. It will have to be woven in carefully.

Soup: As the pot boils, go out to the garden and get the over-ripe vegetables, ones that won’t be used for dinner or put up. What’s left? Beans, beets, corn…let’s go see.

Story: Should she be a doctor? A nurse? It’s way too common. What if she’s into alternative medicine? What if she’s a naturopath? Wait… what if…

Soup: A big bunch of vegetables can go in. First, I add the salt to the tomatoes and some Italian seasoning.

Story: What if he doesn’t know that his wife is a witch? Oh my, this is different. Like that new seasoning salt I found in the Strip District. New and spicy and different!

Soup: Did you get the fresh parsley? Go back out and get that.

Story: Not only is she a witch, she needs to be a good witch. And she gave something up to marry her husband.

Soup: Be careful as you take the lid off. There’s lots of steam. The vegetables get put in. I have potatoes, carrots, beets, beans, celery, and zucchini.

Story: Her death has to be so violent that there is no way the husband could have physically done it. Okay, when he gets up he can’t find his wife. He’s done something, broken something, so he bought her a present and he wants to give it to her. She’d been asleep when he came home…he goes out into their back yard. Because she loves plants and herbs and flowers there are beautiful gardens. Oh, and she has a workshop out there. He opens the door and the smell of lavender flows out because she’s just harvested some. But she’s not there.

Soup: Give things a good stir. Get all the good stuff from the bottom mixed in.

Story: She’s a witch. Man, I love this idea. What he broke was her crystal ball, accidentally because he’s clumsy. Go back to the accident. He was on a bicycle when a hit and run driver almost killed him. Crystal, his wife’s name is Crystal…she was there and did CPR on him and stayed with him. They fell madly and totally in love. They adore each other.

Soup: Scrub the jars in hot soapy water that you’ve added a spoonful of bleach into and put them into the steamer. Stir the soup again.

Story: Love. They fell in love. He’s got to be a nerd. Computer guy. Systems architect. That sounds boring. Jack O’Neill. I like that name. He’ll be 37. In the accident he almost lost the use of his right arm. It’s still damaged. He’s right-handed. Have to make sure the cops can’t pin it on him.

Where is he? Oh, the backyard. Looking for Crystal.

He sees her sitting under the arbor, but something is very wrong.

Soup: The jars, lids, tops, all have to steam for twenty minutes. Time to take the soup off and put it through Grandma’s food mill. I love the feeling of the wooden pointy thing that goes into the cone and smashes everything. Pour, press, grind. Pour press, grind.

Story: What’s wrong is that her body faces forward and her head faces back. Jack stares in horror. The beautiful crystal necklace he bought breaks. The beads scatter catching light as they roll away. 13 crows rise up in the air, their caws overwhelm all sound. He falls to the ground, crows screaming.

Soup: Get the funnel ready and the little do-hickey with the magnet for getting lids. Take the top off the steamer very carefully. Fill and cap the jars. Get them ready to go back into the steamer.

Story: The cops have to let him off. Doctor tells them he didn’t have the physical strength to do this. In the meantime, a reading of the will states that there are things that are to be given to a woman Jack doesn’t know. 3 books, 3 statues, 3 bracelets, and the crystal ball. Jack is stunned. Who is this person?

Story: The woman, Silva, shows up to claim the items in the will. Things are okay until Silva sees the cracked crystal ball. She totally freaks out. Jack says he didn't mean to break it. She screams at Jack. “You killed her, do you know that?” Jack is stunned. Then she tells him Crystal gave up her daughter to be with him. “What are you talking about?“ Jack says. “There’s no daughter. We couldn’t have children.” Silva runs out. Jack stares at the crystal ball and, shock! sees the image of Crystal's face in it. He hears a horrible shriek. He goes outside. Silva’s body is on the ground, face down. But her head is twisted face-up. Her eyes pop open and she whispers, “Tell Bella. Tell Crystal’s daughter they’ll want her dead, too.” Those crows have to be there again, cawing, screaming...

Soup: The timer is done. Let the jars cool. Do you hear those lids going pop! Pop! As they seal up?

Story: Jack is going to have to find this girl As he does, he’ll find out his wife was a witch. When he finally tracks Bella down she’s a …

Posted by Kitty Griffin at 4:23 PM