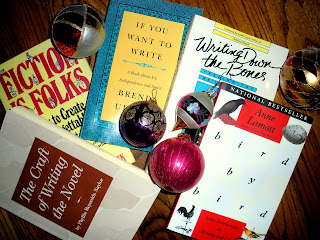 I’m wrapping up this year with frantic dashes out the door for last minute gifts (yes, oh young ones, the madness continues, even as your children approach thirty). At the same time, I’m mentally preparing myself to move on to a new writing project. Which project I choose is still a mystery to me. Will it be the half finished (or is it half begun) YA novel I started, shockingly, in 2002? I had no idea it had been so long ago until, looking for the most current version, I revisited the ten or so early ones in a folder on my desktop. Should I maybe choose the historical fiction novel I’ve been mulling over for years, partly because I know I would enjoy the research it involves? Or will the winner be the new idea that hit me last month completely out of left field? (a definite warning sign of a possible passing fancy) To make things even more complicated, I listened to a segment on NPR this morning which discussed the new multi-platforming movement in Kid-lit and realized, after bemoaning feeling like a techno-dinosaur, that my “passing fancy” idea may adapt itself perfectly to this format.


However it ends up, I’ve decided that my musing time might be a good opportunity for a refresher course on the basics of writing, especially since, to quote the NPR article, “As fun as the online missions” (i.e. multi-platforming) “may be, everything still revolves around the books.” Whew! So I dug out a number of “how to write” books from my shelves and decided to wrap a few suggestions on plot development into a neat little package for you. Though each author offers their own treasure trove of thought and insight, I’ve chosen Phyllis Reynolds Naylor’s straightforward, The Craft of Writing the Novel .


And for a second little gift, check out Auntie's Light As Air Sugar Cookies, the lightest, most delicate sugar cookie you'll ever taste!! (Don't be mislead by the word light) 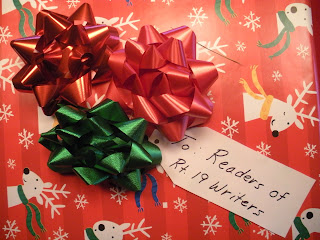 Problems of Plot
In Anne Lamott's Bird by Bird she refers to a manuscript she had submitted and which her editor rejected.
The passages are from her chapter on Plot Treatment.


"The editor went on to say, I had in effect created a beautiful banquet but never invited the reader to sit down and eat. So the reader went hungry." "The book felt like a house with no foundation, no support beams, which was collapsing in on itself . . ."

Some truths about plot:
Plot comes into focus by perpetually asking yourself “what if . . .”
Plot delineates your main character’s journey toward change.
You can learn a lot about your plot by summarizing it in twenty-five words or less.
Theme and plot are two different things. Define your theme, keep it before you, and refer to it often.

Some necessities in plotting:
Keep your Main Character (s) your central focus. Other great characters might be important, but don’t allow them to shift focus from your MC, (I almost always end up with a main, and a supporting, character. And my supporting character almost always emerges as the more engaging of the two, something I then have to correct)
Give your MC a problem that is important to him and that is fraught with obstacles. Then find a way in which only he can overcome them. (note a comment further down on credibility)
Create each obstacle as pitting the MC against something within himself.
Increase the emotional tension by giving your MC the burden of having created the obstacle, at least in part, himself.
Recognize the climax, or turning point, in your story (I’ve been shocked to find that my own stories have occasionally fooled me when readers describe the turning point for a character differently than I intended)
Know your hook—the suspense that compels the reader to keep reading.
Include intriguing subplots that feed into the main plot, but never let them steal the show. For fellow subplot freaks . . . control the urge!! 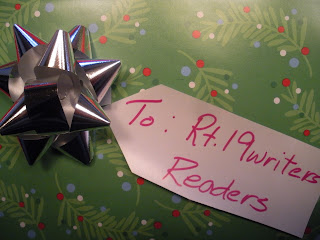